Short, Sweet, & to the Point...Our Quick Trip to Denver

WOW what a crazy past few days! Just 1 week ago today (almost to the minute) I was on the phone with Denver Children's Hospital making an appt with a pediatric dermatologist. We packed up & left on Sunday at 9:00am. After getting gas we were on the road at 9:30am. Long story short...we only had to stop about 5 times on the way down. We got there 11 hrs 15 mins later...at 8:15pm. Not bad for our first road trip together!

Sunday night we did nothing...which was nice cause we were both tired. Monday we got up & sat around for a little while. Then we went to the mall for lunch, walked around, & then went to Target. Then went back to Jenn's & ordered dinner & went to bed. Jenn showed me my new favorite place...a frozen yogurt shop where you serve yourself. There were like 10 different kinds & you could mix & match as much as you wanted. Then there were tons of different types of toppings, too!!! Ahhhh I was in heaven. For those of you who don't know...I don't like ice cream so frozen yogurt is my fav-or-ite!!!!!!!!! So I had to partake in some yogurt...almost $8 worth of it, too!

Monday we got up & went to the mall in search of the Disney store....LOL it'd been out of business at that mall for 3 years! But I did get something I'd been looking for for a while now though. I was SOOOO excited. I'd been looking for some type of head covering for Brooklyn when she has her expanders in her head. Something that was more fitting around the forehead but huge around the rest of her head. I thought maybe a scarf would work but I wasn't quite sure how I'd tie it. Anyways, we were walking by Aldo Accessories & Jenn saw it! I loved it so much & was so confident that it was the PERFECT hat that I bought 3! Here it is: 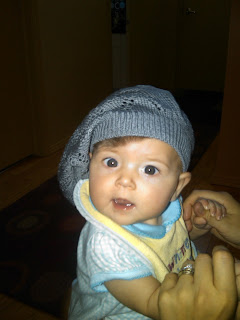 Tuesday afternoon was her dermatologist appt. It was at the new Children's Hospital....talk about huge & super nice!!! I actually found the place quite easily & then found the office pretty quick, too. I'm glad I took Brooklyn in her stroller though cause it would have been a lot for me to carry everything. We checked in & they took her weight & stuff. Then we went to the room where the nurse asked us a bunch of questions. When she was done a resident came in & I answered pretty much the same questions for her. Then the doctor came in. Her name is Dr. Joanna Burch & she came in with a slew of residents & fellows!

I'd told them that we're seeing Dr. Bauer in Chicago starting in January so Dr. Burch asked outright..."Why are you here & not in Chicago?" She was very straight forward, but was very nice about it too. I told her why...cause it's much easier for us to get to Denver than it is to get to Chicago. She completely understood; but then said that if we have to follow up with the surgeon in Chicago every year or so then she'll give me the name of a pediatric dermatologist in Chicago that we can see in stead of us going both to Chicago & Denver. Totally makes perfect sense to me, but I'm sure that we don't follow up with Dr. Bauer. She said that she's perfectly fine seeing Brooklyn if we don't follow up with anyone else after the surgery; but we don't need to follow up every year. Every other year would be just fine with her.

She felt her nevus, looked at it, checked her skin for satellites - and then said that she looks great! She said that Dr. Bauer is an excellent doctor who will do a fantastic job. She said that our plan is right on track & is happy with our choices. She did, however, make sure that we're having an MRI to check for NCM. I assured her that we're having it the 4th of Jan. She was very concerned about NCM & wanted to make sure that Brooklyn was developing properly & that things were going ok for her, which I assured her they were.

And that was it! She said Brooke looks great & she doesn't need to see her before the surgery unless she develops any nodules, black bumps/spots, or get's irritable & is showing signs of developmental delays. Other than that we can probably make an appt to see her again about a year after the surgeries are over.

Later that night we went to the Outback for dinner, then went back, packed up our stuff, & went to bed. Wednesday AM we got up & were on the road at 9am. I honestly could NOT have asked for a better child that day. She was absolutely perfect! She slept for 3 1/2 hrs so I was able to drive from Denver & not stop until we got to Casper, WY! There we got out, stretched, got gas, changed a diaper, got something to drink, & got back on the road. We stopped again once & then stopped in Billings, where we went to WalMart for a bit. I got her out of her seat so she could stretch & move around. We'd have made it home in 10 hrs but we had to stop at WalMart so we made it home in 11hrs! I'm still quite impresed! :o)

I came home to find my cookbook proof waiting for me! It turned out absolutely amazing. I'm VERY happy with it. I'm now proofing it one last time before I send it in to the company to be printed. They should be shipped by 10/26/10, which just so happens to be our anniversary! :)