No one is perfect...and I know not to expect perfection from anyone. But that's all I see when I picture Brooklyn post-surgery. I try my hardest to snap myself out of it though cause I know it can't be perfect. For her, though, I want it to be. Now that we are almost done with surgery, I can't stop thinking of her school years and of her own self-esteem. I just want her to be happy with our decision to remove. I'd imagine that when she truly thinks about either having a hairy forehead or the scars, that she'll pick the scars, but I honestly think that's every Nevus parent's worst nightmare.

For now, though, I'm going to sit here for the very last time, in the waiting room of the Highland Park ambulatory surgery floor. I'll wait for Dr. Bauer to come in & tell us what he did, then I'll go & put on my post-surgery gear, & I'll go hold my baby for one last visit to the PACU. Taking the expanders out are easier on them than putting them in, so I'm anticipating a quick recovery. :)
Posted by ~Merilee at 12:10 PM 0 comments

Ugh I guess life has caught up with us! I have been absolutely HORRIBLE in keeping our blog up to date. Last year I got a 2011 Blog Book, which I just adore. It is a book made of all my blog posts from the whole year. I love it and look at it frequently...and just figured I'd do one every year. Well it's kind of hard to do a 2012 Blog Book when I haven't finished blogging about the year yet!!!! When I sat down to finish 2012 I looked back and realized that not only am I "behind", but I am 6 MONTHS BEHIND!!! Holy moly Merilee!!!! Wow...I guess life really has totally taken over and I just haven't had the time to blog. So here I go. Over the next couple weeks my main priority is to get caught up on my blogging so that I can get my 2012 Blog Book!!

This post will stay on the top, and I will post the new blog posts just below this paragraph. That way you don't have to go searching in the archives. (However, if you do want to browse along, the archive section is to the left, just under the link to buy cookbooks.)

Get your own Blog Book here: http://blog2print.sharedbook.com/blogworld/printmyblog/index.html
Posted by ~Merilee at 9:16 PM 0 comments

This past Saturday Cali & Brooklyn had their Nutcracker recital. This was Cali's 3rd, but was Brooklyn's 1st one ever! They LOVED dancing, practicing, & putting on their costumes, but most importantly...doing their hair & putting on their makeup! I am attching the videos, but here are some pictures first... 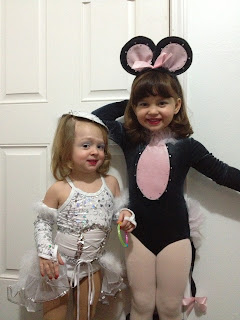 Brooklyn was one of Mother Ginger's children...like what Cali did last year. It's nice that her bubble was so small cause her hat fit perfectly (well, until the performance.....you'll see!). Any bigger & it wouldn't have fit good. Cali was a mouse, who was fighting with the rat queen to get the Nutcracker. 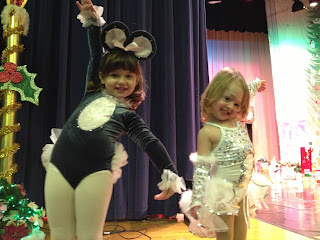 And here they are at the end of the performance...still showing their stuff!!
And here are the videos!! (I should have a disclaimer here first though... The recital was broadcast on our local TV station & the internet so there were a lot of video cameras around. My 3 videos that I took are not from a great angle cause I was trying to not get in the way of the TV cameras...so I do apologize.)
This first one is of Brooklyn. It's really hard to point her out cause all the kids are so small. But I'll do my best.... Right after they all come out of the skirt, Brooklyn's well horrible fit hat kept coming off. So she went up to her teacher, Miss Janet, & she put it back on Brooke's head. So if you pick her out there, when Miss Janet is putting her hat back on, then you can pretty much follow her the rest of the dance. You can also point her out really good at the very end when they were waving bye. Brooke was the very last one to keep waving & Miss Janet had to get her & redirect her back under the skirt!
This is a number that was in the middle of the performance. They all had reindeer noses on & danced together on stage. I told Cali to go stand by Miss Janet so that I could see her better...& she did! So she's the little mouse right by Miss Janet in the front middle of the stage. Brooke is on the right side, as you look at the stage, in her little white costume. The cute little girl couldn't get her nose to light up until the very end...but she got it & was super cute. :o)
And here is Cali as the little mouse. Again, cause they run around the stage so much, it's hard to tell where Cali is the entire time, but when they first go on stage & go walking around the bed, Cali is the first little mouse right behind the boy. Then just a little way into it, she gets to the nutcracker first when they are fighting Clara for it. Then again, when they are in the circle, she is holding the rat queen's hand, on her right.
I hope you could pick the girls out & that you enjoyed the videos!! We certainly enjoyed watching them have a blast dancing the night away!!
Posted by ~Merilee at 7:49 PM 0 comments