Happy 3rd Birthday party to me!!!

WOW...It's amazing how fast time fly's by. Too fast!!! Our little Cali Berlin turned 3 on June 27. We had a nice little party for her the day before with lots of friends & family. She had such a great day & she still talks about her "Happy Birthday to me Party!!" Here are some pictures from the day!!


Cupcakes I actually made, believe it or not! 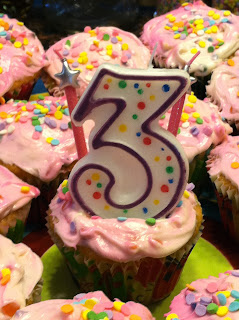 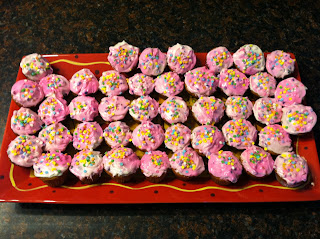 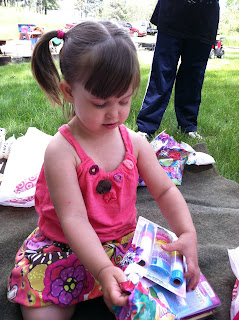 Her absolutely favorite present of the day...pink sunglasses!! 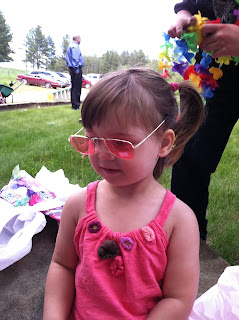 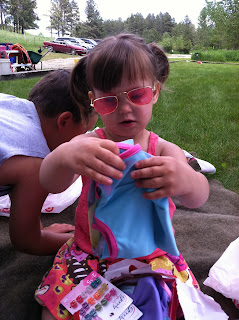 And more...with the pink sunglasses again. She wore those things the rest of the day. :o) 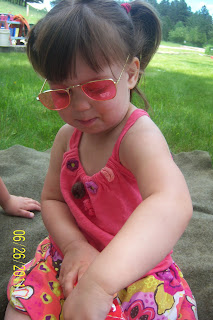 Some of the kids riding their cars... Notice the pout on the birthday girl! 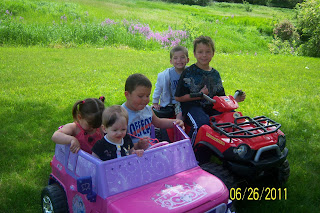 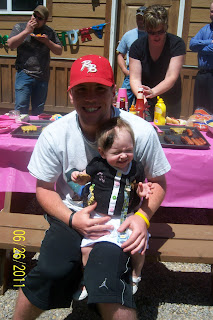 Cali taking her turn with the pinata (Yes, folks, that's a pool cue... Figured it's less dangerous than a baseball bat!!) 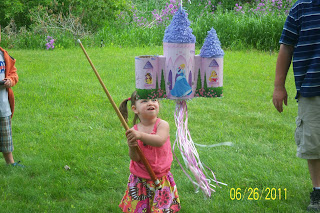 LOL Look at THAT look! 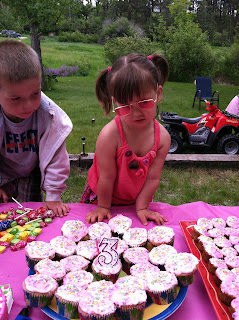 Quick & To The Point!...Our Trip To California

WOW we just had THE quickest trip to CA ever! It was so great to get there, but it was so quick that it was over in the blink of an eye! We (me, my mom, Cali, & Brooklyn) left MT on Saturday, June 18th & drove to Billings, got on a plane, & flew DIRECTLY to LAX. Yeah, one of the newest things we Montanans have now are direct flights to Vegas, Phoenix, & LAX on Allegiant Air. It's sooo nice! They only fly once on certain days, so if you're flexible with your plans it's totally the way to go. 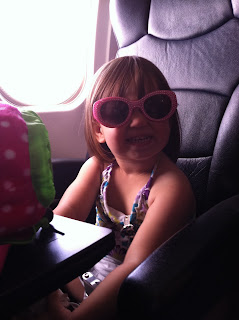 Little Cali B on her first flight in her own seat!!

(Because I'm actually writing this in August I don't remember every little detail of the trip, which is probably nice for you, so the details will be spared!) We had a pretty uneventful flight down. The 4 of us sat together, which was really nice. When we got there I had to leave pretty much right away cause I was meeting Angel, a nevus owner who I've never met, but have communictated with through text, phone, & Facebook. She works at my favorite place in the world (yes, Disneyland) & got us cheaper tickets. THANKS so much to her for doing that for us! So I was able to meet Angel & had a quick chat then went back to my grandma's house. 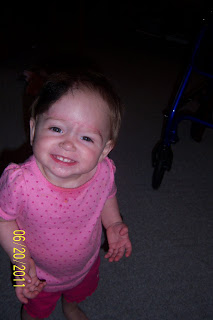 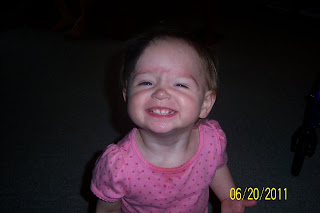 Two cute little Brookie pictures...such a goofball!
Sunday was Father's Day. Yes, I booked a trip over Father's Day. When I booked it I had no idea it was actually over that weekend...I just booked it & then realized...oops! But Dustin had a long weekend with no family & no work so he relaxed! We were able to go to church with my grandma & great-grandma, then went back to the house, ate, & got to see more family.

The whole point of going to CA was so that Brooklyn could see a dermatologist. We saw a dermatologist in September of last year in Denver but she has since resigned. (To read about why we needed to see a derm please click here. To read about our first derm appt click here.)Anyways, when I got the letter from Dr. Burch in Denver saying she was resigning, I was sad, cause she was so close, but I wasn't heart broken. It's ok...we'll just find another one!

Well finding another one was easier said than done. Derms that specialize in nevi's are few & far between. After asking lots of other nevus families (and my own family members who just so happen to be related to dermatologists that refer their patients to this guy) I finally decided on Dr. Lawrence Eichenfield at UCSD in CA. A few other nevus families go to him & love him. I picked him because we'd have to go out of state anyways to find such a specialized pediatric dermatologist. Why not Chicago, you may ask. While we will be going to Chicago a lot between now & when her surgeries are over, we won't be going there long-term. The only reason we'd go there is to see the derm. So I wanted a derm who was in a place that we visit a lot. Where do we go out of state a lot....California, of course! And what better place to find a dermatologist?! So I got an appt with him on Monday, June 20th.

We found his office fairly easily thanks to Bessy (my GPS lady) & were there with plenty of time to spare. Dr. Eichenfield is THE nicest man. He spent much more time than I'd thought he would with Brooklyn. He was so great with her, too. My mom stayed out with Cali, so my grandma came in with me....4 ears are a heck of a lot better than 2. He spoke to both of us & was just amazing. I'm so happy that I chose him. He said that he's actually worked with Dr. Bauer on numerous occasions & he's also worked with the top nevus dermatologist in the country, Dr. Ash Marghoob, who is in NY. They've done presentations & talks together, so he's quite knowledgable in the subject of nevi's!

He gave me a lot of reassurance. He said that we're doing everything 100% right, that he wouldn't be doing anything different. Most importantly to me though, he said that we have the best surgeon in the world...Dr. Bauer! That makes me so happy. There are 2 pediatric plastic surgeons who are colleagues of Dr. Eichenfield there at UCSD & he said that Dr. Bauer is STILL the absolute best...better than his colleagues. So that says something right there!

He told us about some scar laser removal options that we have, but to be completely honest I wasn't 100% FULLY paying attention, just cause we're not there yet. When her surgeries are done & over with...then I'll be all ears. But for now, I'm just focusing on surgeries to get this last 20% removed. Thanks to my grandma, we were able to give Dr. Eichenfield a business card of ours with the picture of Brooke on it so he could see how big her nevus was in the beginning.

So he checked her out, looked for satellites, told us how rare we were that she doesn't have any, & said that he wants to see her back about 6 months after her last surgery. Well that works out perfectly cause that'll be about August 2012 & we're already going to CA that month! So we'll see him again then, and THEN we can talk about the laser scar removal. One step at a time!

Monday night we were able to see a cousin of mine who we don't see all that often. Then Tuesday was Disneyland (see that blog post!!). Wednesday, unfortunately was come-home day. See what I mean by Quick & To The Point?!

Also on our quick 3-day agenda:

a haircut for Cali 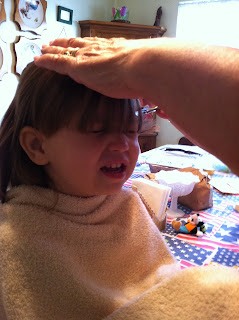 a birthday party for Cali 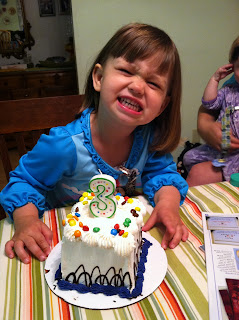 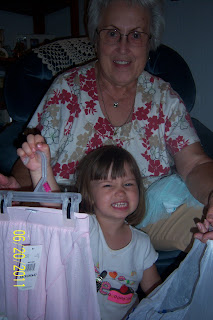 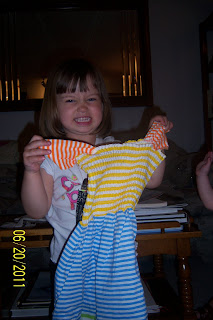 And some quality Nanny/Brooklyn time (that's 5 generations right there!) 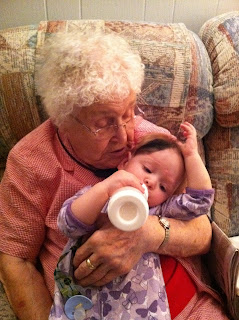 We had such a great time with our 5 generations, a great time at Disneyland, a great 3rd birthday party for Cali, and a great time getting back to California...which just doesn't happen as much as we'd like it to. Till next time!!
Posted by ~Merilee at 5:53 PM 0 comments

Of course, it wouldn't be a CA trip if Disneyland wasn't involved. Plus, I know it like I know my own home, so we just had to make a trip. The best part of it though...our great friends from AZ came too! Remember our awesome nevus friends, the Mollers, who are from AZ? They were our next door neighbors when we were in Chicago for our long trip in January. They have a daughter, Zoie, who is 5 & a son, Zac, who is 1...remember now?! Well I was telling Amie one day way back when that I was going to take Cali to Disneyland. She got this awesome idea to fly to CA, go to D-land with Zoie, & then fly back. So yup, that's just what she did!!!!

They flew out & arrived at John Wayne airport at 7:30am. We picked them up & then went straight to Disneyland. All Zoie knew was that she was going to CA to see Cali...so it was so much fun telling her we were all going to the dentist when she landed in CA!!! We got to Disneyland & she was soooo excited. Cali, on the other hand, was totally clueless. She still is at that age where she doesn't really understand what's going on. But I tell you what...when we got in there & showed her everything she had a ball. She was definitely clingy, needed her paci, & wanted to be held because she was so apprehensive about everything, but she loved it.

(So don't mind the paci in most of the pictures...it comforted her & that's all that matters!!)

Eating breakfast with the characters 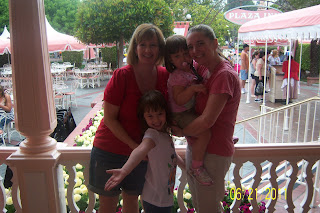 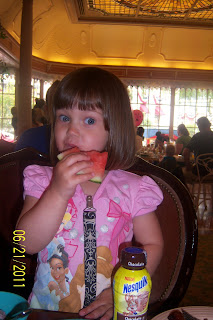 In the AM still, and still not quite sure what's going on & why these people are dressed up in these funny costumes. She was, let's say, a bit uncomfortable with them. But hey, I'm not a character person myself so maybe it's hereditary! (I like seeing them from a distance but they kind of freak me out up close!!) 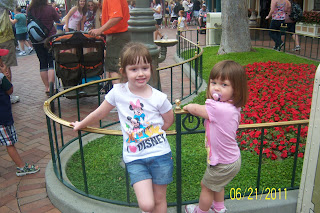 And here we are on the railings again...but paci-less so we're warming up!! 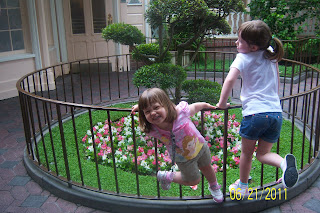 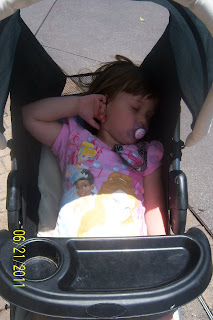 But once she was awake there was no stopping her! My little sunglasses-wearing Diva had a ball!! 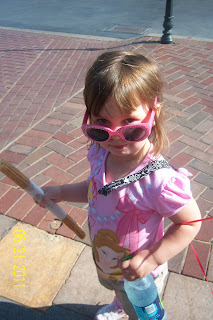 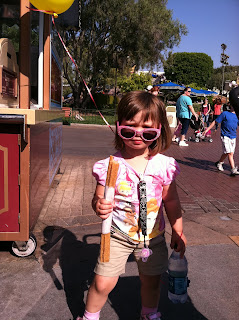 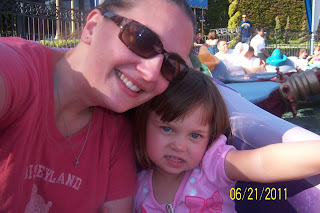 Unfortunately our day had to come to a close. Amie & Zoie had to leave around 6:30'ish to head back to the airport for AZ. Here's Cali & Zoie right before they had to leave. 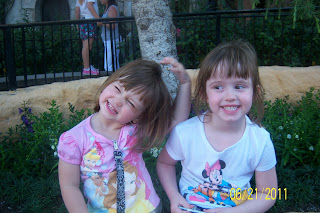 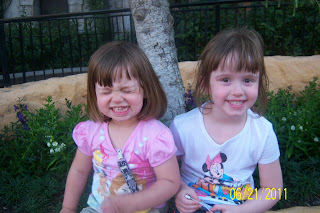 It was such a great, memorable day with Amie & Zoie at Disneyland. I loved every minute of it & I'm so thankful they were able to come! Thanks Amie & Zoie for such a fantastic fun day!!!!
Posted by ~Merilee at 10:59 PM 0 comments