My grandma tells me over & over that I need to submit this to AFV. I've tried & tried but just can't get it to upload for some reason. :(  Here's one of the funniest videos I've seen in a long time...

Well ok here's a little background first... Brooke was asleep in my arms & I noticed a little pimple on her cheek, so I asked Cali to get me a wipe so I could get the pimple. She got me a wipe, I got the pimple, then started wiping her face very softly....and you can see the rest..... Oh and yes...she's completely asleep, except for at the VERY end, where you can see her wake-up. :)

My work career isn't anything exciting. Yeah, I have quite a few stories to tell, but it's not all a lavish, glamorous, luxurious Nursing career! Boy how I wish it was...hopefully someday. I became a nurse so I could work in OB. I just love the labor & delivery process. However, all the OB nurses have been there for years & they're not going anywhere soon, that's for sure. So my first job was at the State Home...a state mental facility with 3 wings of residents who were one step down from the main Montana State Hospital. That's where the majority of my stories come from. Literally, there wasn't a day that went by, when I worked there as a CNA, that I didn't come home with a new bump, scratch, bruise. When I was about 20 weeks pregnant with Cali I got horse-kicked by a 1-legged resident when I was trying to give her her breathing treatment. Stories stories stories. I don't like routines & I definitely don't like long-term-care...both of which were the epitome of the State Home. So only about a year after starting there, after I came back from maternity leave in 2008, I found another job. This job was at the Nexus Treatment Center...a 9-month meth treatment center specifically for male inmates. Keys, walkie-talkies, locked doors, being buzzed in & out, keypads...you get the point. But again...a routine...pretty much the same story day in & day out, which is what I don't like. So I looked for something else. I started at a doctor's office in September 2008...literally something I said I'd NEVER do when I was in nursing school. I don't know why...I just always said I'd never work in a doctor's office. The pay wasn't good at all, but basically, you pay for convenience. No evenings, no nights, no weekends, no holidays. You seriously can't beat that in nursing. So I was fine with the lower pay. I immediately knew I loved it. It wasn't long-term-care. I mean, yeah we had our older population, but the doctor did OB as well...which I love...so I got the best of both worlds. And it certainly wasn't a routine. Every day was different...which is what I wanted. For about 6 months I did all 3 jobs. The doctor's office was only part time (2 1/2 days a week) so I needed to make up that extra income by working the other 2 jobs as well. After having a 22-days-in-a-row stretch & basically got burned out so I quit the State Home. Then shortly thereafter I quit Nexus. I was at that doctor's office for 4 years...almost to the day. There were 7 women in that office & boy did we ever have fun! We had THE best Christmas parties, get-togethers, & just laughed & laughed together. So it made it VERY hard when another opportunity presented itself to me in June of this year. Another OB/Family Practice doctor was coming to town & she would be a hospital employee...meaning her nurse would be as well...which means more pay, better hours, & all the hospital employee perks & benefits. It took me a LONG time to make the decision, but I finally decided to go for it & apply for the job. I applied for it, had a phone interview in August when we were on vacation in CA, got in the final two, interviewed with the doctor, & then got the job! It was SO bittersweet. The doctor is so great...she's actually 2 years younger than me & is my same height! After much deliberation, Dustin & I decided that I needed to take the job. Mainly for more hours & more pay. It was so hard though. I mean at the job I was at for 4 years I literally had it made!!!! I could take off any day that I wanted as long as my co-worker could cover me. I had a lot of freedom, could be as organized as I wanted in my own space, & just truly loved what I did. I got to follow women as they were trying to get pregnant, then finally did get pregnant, then go through their whole pregnancy, & watch their new little baby grow up. It was just awesome. I became very attached to both the patients & my co-workers. So it was no shock when I gave my 2-week notice with a tear in my eye. This job also could have never been more flexible with Brooklyn's surgeries & doctor's appointments. I had to take SO much time off for her 4 surgeries, 2 dermatologist appts, & 2 surgeon consult appts & they never once complained. I am FOREVER grateful for all of those amazing women. :)

But....this new opportunity was too good to pass up. I'd be a hospital employee, but work just right across the hall from where I was. I'd get all the employee perks/benefits (if I wanted them), better pay, more hours, newer computer system that could do SO much more that I ever guessed a computer system could do, brand new office all to myself, more responsibility, & the list goes on. So I took the job & started officially in September. Here's what my new office looks like: 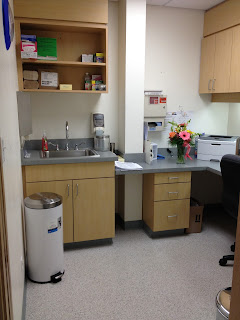 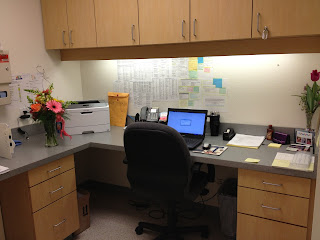 With some beautiful "Congratulations on your new job" flowers from my grandma & great-grandma! 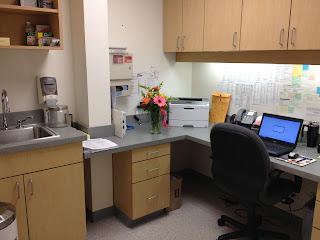 We saw our first patient on 10/1/12 & we're pretty slow so far...but that's to be expected with a brand new physician. We'll pick up soon, I'm sure. I really really REALLY miss my previous job, but I'm happy to be here & am excited to see how everything works out!!!
Posted by ~Merilee at 8:15 PM 0 comments