Today has 3 special meanings: It's been one month since my father-in-law died. Sometimes it seems like it was last week, but more often than not it feels like its been months & months. I don't know why, but time has gone by really slow since then.... Also...Today was my due date 2 years ago, which makes today the day after Brooklyn's birthday, which also makes today special because it was/is my grandparent's anniversary! But what makes today really special is that today they would have been married 60 years! fortunately they did make it to their 50'th...which was a goal for both of them, but my grandpa died shortly after. Hard to believe he's been gone almost 10 years. So today lots of things were on my mind...
Posted by ~Merilee at 4:31 PM 0 comments

The day our lives were changed forever...

Two years ago today, our lives were changed forever.

Ok ok, I usually think it's so cliche when people say that things have changed their lives. I mean really...CHANGED YOUR LIFE?! It takes something BIG to change a life....or so I thought.

Of course the birth of Brooklyn can change a life, and it did for us. But it was shortly after her birth that we really realized our lives were changed forever. Ok...I'll explain......

At 2:22am on Sunday, March 7, 2010 our little Brooklyn Marie was brought into this world at a measly 6 pounds 4 ounces. For the past, oh, 6'ish months I was CONVINCED that I was having a boy. My pregnancy compared to Cali was complete 100% night & day...they were literally polar opposites. So my very first shock was that she was a girl! After that, we had a new shock. It looked like she had a bruise on her forehead. No biggy right? Well, not until we were told by my doc that it was a birthmark on her head. Then the next AM we were told it was a "hairy nevus" & that it would need to be removed b/c it could cause cancer. I think we were still in the "new baby bliss" that we really didn't think anything about it. It was after she was a couple months old that I finally realized what we had in store for us.
I was literally on the computer for hours & HOURS every single day researching...just trying to find anything I could about removal surgeons. For a condition that happens just one in every half a million births, this was quite the difficult process. Long story short, I happened to come across Nevus Outreach which had a conference every other year. I read the speakers' bio's (for the conference that was coming up in just a couple weeks) & that's when I found Dr. Bauer, our amazing miracle-worker of a surgeon. :o)  I knew he would be the one to remove Brooklyn's nevus when I read the following words under his bio:

"Dr. Bauer has the most experience removing nevi's in the world & he has a particular interest in tissue expansion."
I was hooked from then on. If he's the best...he's going to be the one that removes her nevus. And the rest is history. She's now nevus-free with just 1 more touch-up surgery to go later on this year!!!!!

For the past 2 years we have done nothing but eat, live, sleep, & breathe NEVUS! That's been our life. And now that she's nevus-free we don't have as much to do with it, but it will be a part of all of our lives forever! Thus...the birth of Brooklyn has changed our lives forever......

Call me different, but 99% of the time parents are like "wow I can't believe how fast my child has grown!" And I'm like that with Cali. Thinking that she will be 4 in June just baffles me. I just can't believe it! But when I think about Brooke the only thing that comes to my mind is... "She's ONLY 2?!" ;o)  Seriously?! I think that we've just been through so much with her that it seems she should be older than just 2. But she's finally 2 & that's that.

A little of her milestones this past year:
She tried potty-training herself at 20 months & was fully trained at 21 months. We weren't in the frame of mind to train her until she turned 3, but she was ready at 1 1/2 so she did it! She was actually potty-trained BEFORE Cali! ;)
She started day care 2 days a week with Cali (in separate rooms of course), which she LOVES!
She is now 2 years old & is just about 21 pounds...which is incredibly small. She's a tiny little firecracker. It's not like we starve her...she has some fat on that little body!! She's just a small girl!
She loves to dance with her sister.
She is starting to say more words. She's gotten a lot better since she started at day care 2 days a week.
She can throw a royal fit! :o)  But what 2-year-old can't?!
And she is an all-around awesome little girl who is so tough for her age. Cali will cry with the littlest thing, but Brooke is a tough little cookie!

Here are a few pictures from her party on Sunday & from tonight when we opened up her last couple of presents & sang to her again. :) 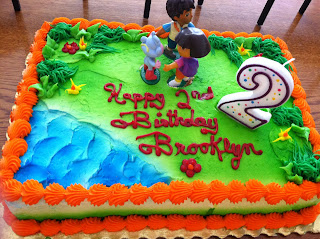 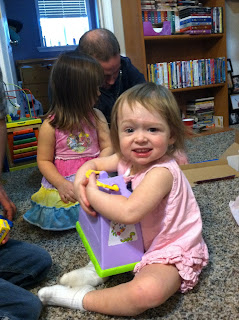 Protecting her new toys from her sister! 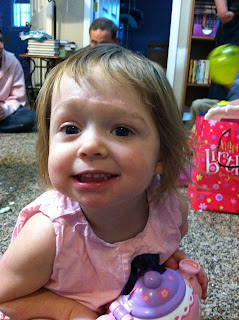 Smiling with her new teapot! 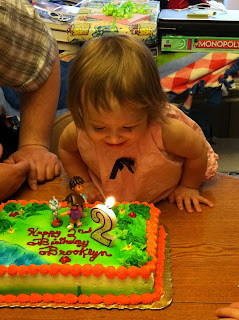 It took her a good 2 minutes to blow out the candle. She was shy cause everyone was staring at her, but she finally did it! 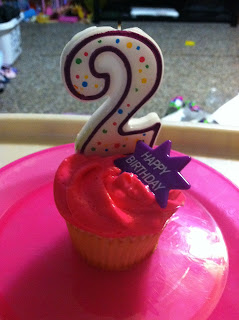 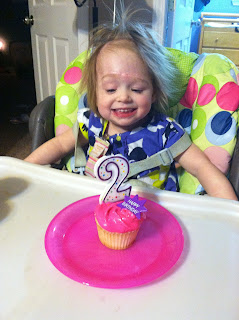 Happy with herself after blowing out her candle! 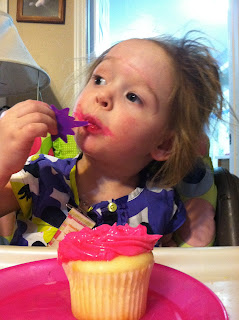 She didn't touch the cupcake...just ate the frosting. Typical!
Posted by ~Merilee at 8:31 PM 0 comments