Well I'm not a very big halloween person, but it's cute dressing the girls up in adorable little costumes & seeing the wheels in their heads turn as we walk up to perfect strangers' homes, saying some weird phrase, & then getting free candy. Hilarious!!

This Halloween was a little different because we're in Chicago. We normally go with Dustin's sister, Marji, & our nephews to a few select houses, & then go home. But unfortunately, because they couldn't make the jaunt to Chicago for the night, we had to go it alone. :(  We missed Trick-Or-Treating with them this year though!!

This year I had a Disney Princess & a kitty for daughters! Cali was Snow White & Brooklyn was a pretty little kitty. We purposefully looked all over for Brooklyn's because we needed something with a hood for her dressing she'd have after surgery. Little did we know that she'd do so good & wouldn't even have a dressing on her head anymore!!! LOL She was still adorable. Here are several pictures from tonight:

Cali with her Snow White dolly 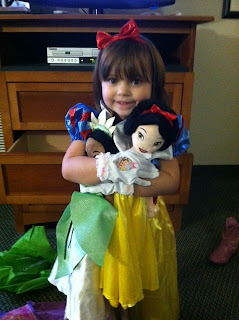 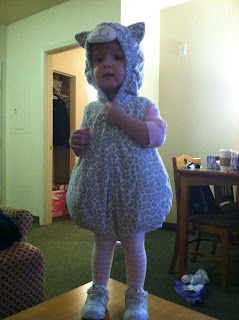 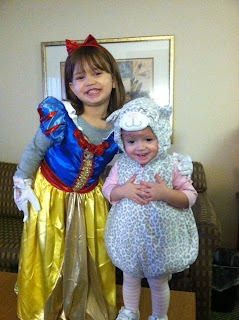 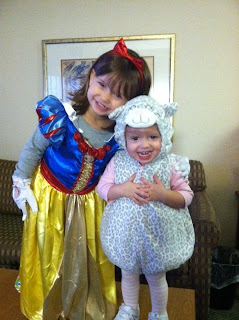 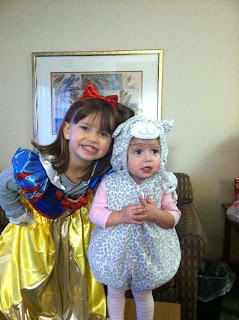 We talked to the amazingly wonderful staff here at the StayBridge & one of them recommended the neighborhood directly behind the hotel to trick-or-treat in. She actually lives in that neighborhood, but said that it's still such a good place to go. She said that from about 4-7pm there are tons of kids running around everywhere. Perfect for us! So we drove by earlier to scoope it out. It was a nice subdivision with super nice houses. Looked good to us. We dressed the girls about 5pm, went down to the lobby to show the staff their costumes, & then headed out. We found a little parking area right next to a park in the neighborhood & got out of the car right about 5:15pm. We just walked in the direction of  the most kids. It was an area with tons of little streets every which way, but we just headed down one area & hoped for the best! 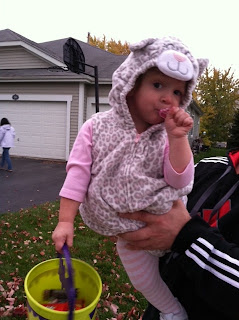 After 2 houses Brooke was hooked on the sucker! 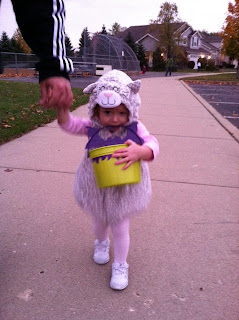 Like a true kitty...she was carrying her bucket around with her teeth. Silly child!!!

We walked from house to house & eventually we were walking right next to another family who were taking their 2 kids trick-or-treating too. There wasn't too much time for chit chat but they were a very nice couple who seemed to be enjoying the night like us. The street we were on curved to the left, so when we got to the end of that one we made a left & it was taking us in a circle right back to our car. We parked right by a park, which Cali saw, so after about 4 houses she was done trick-or-treating & she just wanted to play in the park! Go figure!!! So once we made our way back to the park we said our good-bye's to the other family & snapped a couple more pictures of Snow White & the kitty & then let them play in the park.
﻿ 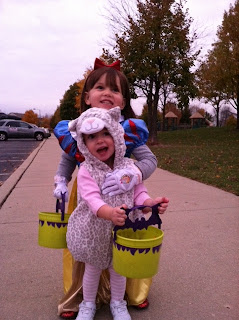 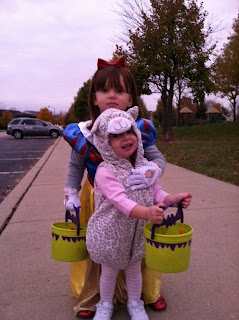 Happy girl playing in the park. Thank goodness I dressed her warm under her dress!! All I had to do was take it off & she was ready to play. It's like I planned it!!!!!! ;o) 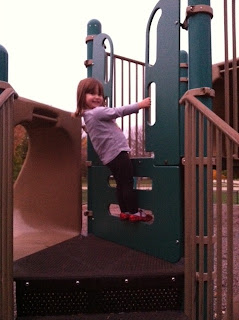 The kitty, on the other hand, had to stay in her costume, but she was warm & happy! 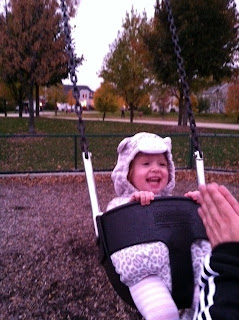 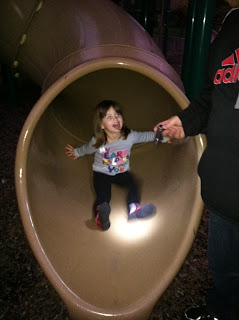 We ended up going to about 15 houses, maybe, but the girls were ready to go before we were! They got their bucket's full of candy & they had a blast....oh & they looked super duper adorable too! :o)
Posted by ~Merilee at 7:08 PM