We started out the day going to Navy Pier (see other post for pics) & then went to the White Sox game. Curt's goal in life is to go to every major league ball park in the country. He already has several under his belt; actually I think he has been to more parks than he hasn't been to. For Christmas last year we got him a framed poster with a map of the country & all the ball parks on it. Then he puts a pin in the parks that he goes to, to keep track. So he needed to go to both in Chicago...and that's just what we did. 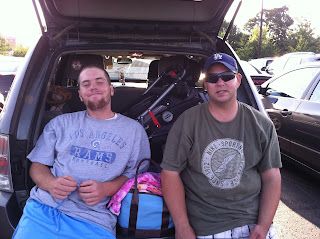 Curt & Dustin waiting for my parents to show up. We got separated (we have the GPS & they don't) so it took them a while to find us! 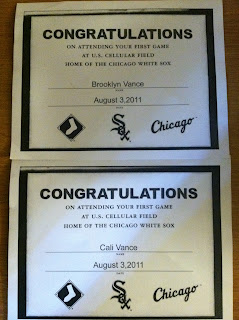 And they even called the caterer to get us milk when the concession stands didn't have any. I was pretty impressed with them.


Here's a view of the field 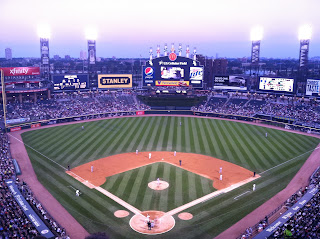 As I mentioned earlier, we went on Curt's 18th birthday. I wanted to do something HUGE for him so I thought, what better present for a huge baseball fanatic than to have a Happy Birthday message on the field's scoreboard?! It took my parents & I a long time to come up with something cute & more interesting than the typical "Happy 18th Birthday Curtis", & we almost missed the deadline, but it was worth the wait. My dad came up with "With 18 in the books, he's one brand new Inning" & then I added the boring typical "Happy 18th Birthday, Curtis" at the end so that he would be sure that the message was for him. (For those of you that don't know...Curt's middle name is Inning. He's named after the 1st baseman on my dad's imaginary baseball team: Curtis Lemay Inning. So it just fits that he loves baseball as much as he does.)

So here's his scoreboard message!! 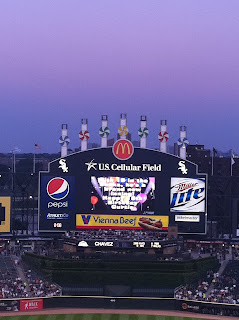 My mom & I had this elaborate plan to take pictures of the board AND of his face when he saw it for the first time. Mom was going to take a picture of the scoreboard & I was going to take a picture of his face. I was so concerned/worried about HER messing up the picture that I was the one who messed it up. Figures. I zoomed in as far as I could go & I got the scoreboard picture & then totally forgot to zoom OUT....so I got a SUPER close-up of his face. See what I mean????...... 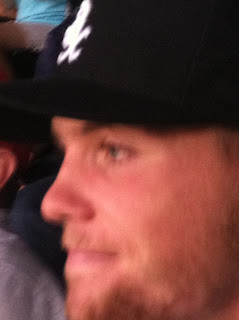 I think he was more shocked than anything to see a scoreboard message just for him!! 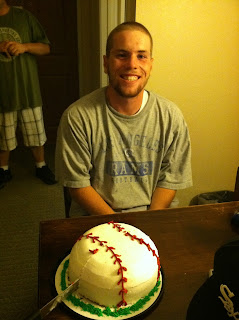 Curt with his baseball cake, of course! 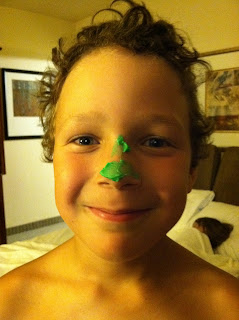 And Mike being silly with the frosting. (And yes, that's Cali asleep in bed in the background!)