What a great Christmas!! I think Cali got a bit overwhelmed though! By the end of the day we were literally forcing her to open presents! LOL  Brooklyn just watned to open stuff so she could put the paper in her mouth! What a silly monkey. I took more videos than pictures, unfortunately. So I don't have a lot of pictures but here are a few: 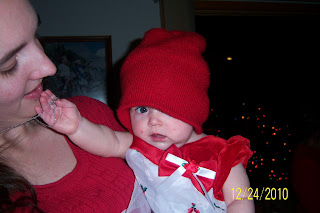 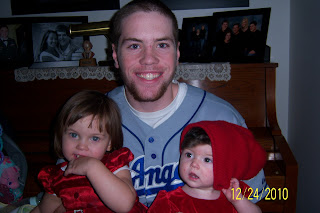 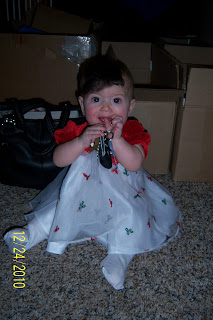 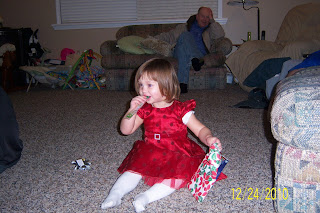 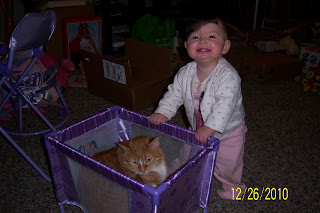 Brookie standing by the cat...she's so proud of herself too!
﻿
We had a great Christmas. But Christmas also meant that we leave in a week. UGH! Unfortunately though, we have been having a HUGE snowstorm. I guess we're supposed to get like 6-12 inches in just a day or 2. So we decided to leave a day early. We're not leaving early to beat the storm or to miss it or anything; we're leaving early to give us enough time to get there. We need to be there by the 3rd at dinner time, so by leaving on Friday that'll assure that we're there in enough time. So off to do more packing I go!!

I also wanted to share this paragraph again. I'll be posting it often, becuase I want everyone to see it!! :)


(I do need to make a very quick side note...I need everyone to know that we're still living our lives as though Brooklyn didn't have a nevus. This means that we use our OWN money for anything and everything. We are BY NO MEANS using ANY of the donation/Brooklyn's Best money for our own personal use. I have said & I will always say, and mean, that that money is being used for insurance deductibles, anything that insurance doesn't pay, and for our trips to/from Chicago. So when I talk about getting Christmas pictures taken this is just like every other year - meaning that we save up for them & use our OWN money. I just wanted to make that clear, so that I don't have to repeat myself time after time!)
Posted by ~Merilee at 2:23 PM